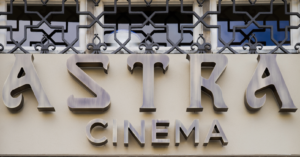 With the Odeon temporarily closed, several theaters in Florence which normally offer only Italian movies have added screenings of vintage and current films in English to the schedule during the last week in January.

Babylon (released in December 2022) portrays a surrealistic Hollywood in the Roaring Twenties, laying bare its decadence, amorality and general libertine environment.  Director Damien Chazelle (La La Land) returns to similar but darker themes in his rendering of the era of transition from silent screen to the talkies.

Brad Pitt plays an ageing and fading star on his third marriage.  Margot Robbie’s character of Nellie, based on the real-life heartthrob Clara Bow, goes to great lengths of excess with drugs, sex and alcohol, to achieve satisfaction and recognition.  The main protagonist Mexican American Manny Torres, played by Diego Calva, struggles against discrimination in the ‘City of Angels’ due to his skin color.

Nominated for five Golden Globes, the film is well-acted but disturbing.

Babylon screens in English at the Multisala Fiamma on Tuesday, January 24 at 9 pm.  For info and tickets, see website:  www.staseraalcinema.it.

This historical drama relates the story of famed American newscaster Ed Murrow as he relentlessly led a battle opposing Wisconsin Senator Joe McCarthy and his ‘witch hunts’ against those he perceived to be communists.  Hollywood personalities and ethnic Jewish persons were especially targeted with many being blacklisted.  The fallout led to job losses, unfounded denouncements and even suicide.

In a reprise of a dark era of the US, Murrow and his team expose McCarthy’s bogus and atrocious accusations again his fellow countrymen.  The provocative film harkens forward to present day conflicts between the media and the political world.

Good Night and Good Luck (2005) screens at the Fondazione Culturale Stensen on Wednesday, January 25 at 9 pm in English with Italian subtitles.  For further information and ticket purchase see website: www.stensen.org

THE LADY FROM SHANGHAI

A 1947 thriller directed by Orson Welles (Citizen Kane) and starring Rita Hayworth and Everett Sloane, The Lady from Shanghai is a tale of an Irish sailor, Michael O’Hara, played by Orson Welles himself, who unknowingly becomes tangled in a web of deceit, mystery, and desire. Hayworth plays Welles’ object of desire, Elsa Bannister, who entices him to sign on as a sailor aboard her husband’s yacht as they travel down the Panama Canal to San Francisco. From there, Michael discovers the dynamics between the passengers on board are not as they originally seemed, and he becomes drawn into the crew’s murderous plotting. The film was acclaimed for its camerawork and clever imagery in the presentation of its scenes.

The screenplay is based on the novel If I Die Before I Wake by Sherwood King, published in 1938.