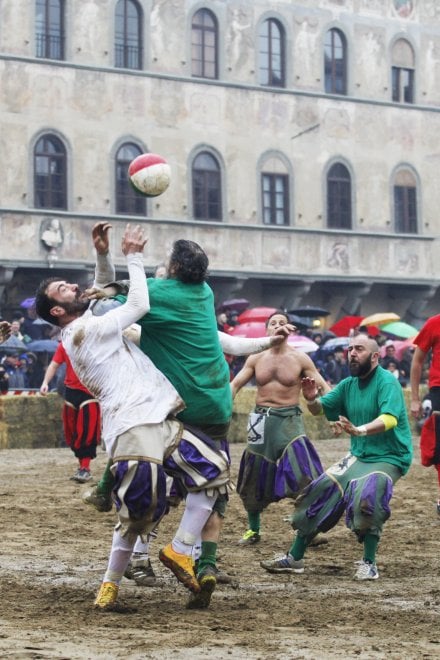 Florence will once again commemorate the historic 1530 Calcio Storico match played in defiance of the siege posed by Charles V of Spain with a reenactment featuring the “Vecchie Glorie” in the same venue, offering a spectacle of men, mud and muscle.

The “Vecchie Glorie” are composed of retired Calcio Storico members from the four downtown Florentine neighborhoods. The Calcio Storico Historical Game Re-Enactment comprises two teams made up by middle-aged athletes from all neighborhoods: the “Whites” of Santo Spirito, the “Azzurri” of Santa Croce, the “Greens” of San Giovanni (Duomo) and the “Reds” of Santa Maria Novella.  Admission is free with voluntary donations which will be given to ANT, a non-profit that provides home care to cancer patients,

In 1530 at the time of the attack, Florence was in the midst of its Carnival celebrations and in order to keep morale up, the city came together and cheered on their soldiers in a feisty game of Calcio Storico (a mixture of soccer and rugby), which is still played every June by representatives of the city’s central neighborhoods. Every February, their retired players who form the 27-member “Vecchie Glorie” participate in the Piazza Santa Croce match, competing for honor, pride, and dinner on the house at the end.