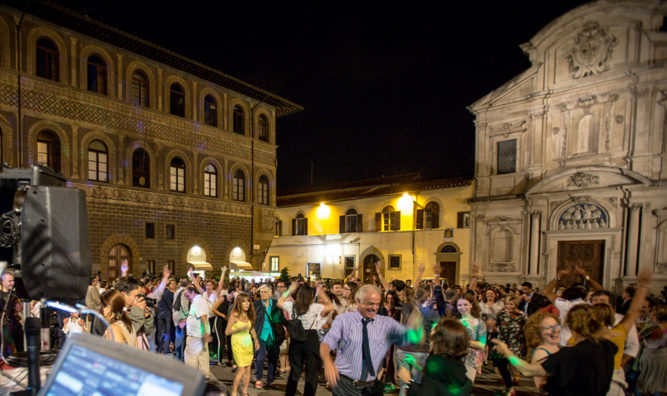 In honour of France’s national holiday on July 14, from 8 pm – midnight Piazza Ognissanti will revel in all things French, from pétanque (boules or bocce) to crêpes. As always, this year’s Bastille Day celebrations is organised by the French Institute of Florence, located in the square.

There will be food and drink stands set up in the square, serving ice cream, fruit and, of course, no French celebration would be complete without crêpes, a crowd favourite. From 8.30 pm – 10 pm, party-goers will be treated to live music performed by Ludo Vandeau and his ensemble, that features an accordionist, keyboard player, guitarist, drummer, percussionist and cellist. From 10 pm – midnight the celebrations will turn into more of dance party with a music set by DJ Fred that will include all the favourite French hits.

The evening will also host a pétanque competition that will run from 8 pm until midnight to crown pétanque champions. Pétanque was created by brothers Ernest and Joseph Pitot in Provence in 1907 and has grown into an important cultural identifier, particularly in the south of France. In recent years, pétanque has also garnered international success and is even the latest suggestion for a new sport to integrate into the 2024 Olympics.

The game itself is similar to boules, the aim being for the player or team of players to score the highest number of points by getting their boules as close to the target, called a cochonnet, as possible. To take part in the competition (as a single player or in a team of 2 or 3), people can sign up by emailing firenze@institutfrancais.it with their name or team name to be given an allotted time. The tournament is free and open to players of all levels, from ages 6 – 99. A prize of two intensive French language courses at the French Institute is up for grabs, each worth over 450€. Further information about the competition and the rules of pétanque can be found here.

France and Florence’s histories have long been closely intertwined, going as far back as the 16th century with the reigns of Caterina and Maria de’ Medici in France, through to the 19th century with the rule of Lorena, and finally the burial of Napoleon’s sister Carolina Bonaparte in the church of Ognissanti, located in the square where the celebrations will take place. Florence was also the first location to open an institute for French culture, founded by Julien Luchaire in 1907, the first of many initiatives to continue strengthening the bond between Florence and France.