Woody and I: Screenings of Allen’s Movies at the Cinema La Compagnia 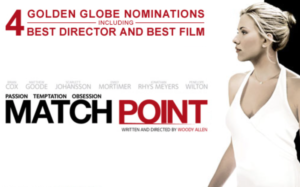 A complete retrospective of movies by Woody Allen movies will be shown at the Cinema La Compagnia from the first week of July until Sunday, August 7. Screenings comprise 20 films in total: all in their original language, accompanied by Italian subtitles. The program features a selection of 20 movies, 18 of which are directed by Woody Allen, while he starred in the other two (Picking up the Pieces and Play it Again Sam).

The event takes the public on an evocative journey through the classics by the American director, screenwriter, actor, writer, playwright, and humorist. Best known for his bittersweet comic films with elements characterized by absurdity and parody, Allen has left his mark on cinema history.  His filmography awaits viewers at the Cinema La Compagnia.

Admission to each film costs €5 full, and €4 reduced rate. For UniCoop Firenze members, there is a discount of 2 tickets at the cost of €1. For more info, visit www.cinemalacompagnia.it

The info on the program & screening times for the coming week are listed below.

Alice has been married for 16 years to Doug, a New York businessman. She lives in Manhattan in a luxurious home, has two children and a life punctuated by shopping and appointments at the health club. One day Joe, a parent from her kid’s kindergarten, meets her and Alice feels attracted to him. Due to the back pain that torments her, she goes to an acupuncturist. The doctor, Dr. Yang, explains that her problem lies not in her back but in her head and heart, and hypnotizes her.  In her trance, Alice reveals the feelings that she has for her husband and the newcomer. Dr. Yang prescribes a series of herbal remedies with amazing properties to solve her dilemma.

PICKING UP THE PIECES

Woody kills his cheating wife, cuts her to pieces and loses one of her hands on the way to Mexico. An old woman trips over it and regains her sight. A miracle is proclaimed, with the involvement of local residents and the Church.

Chris Wilton is a tennis teacher at a top-tier club. There he meets the wealthy Tom Hewett and his sister Chloe, who immediately falls in love with him. The wealthy father sets him up in business, paving the way for an imminent marriage. But Chris meets aspiring American actress Nola (Tom’s girlfriend) and is irremediably attracted to her.

In an unnamed city, shy Kleinman is awakened in the middle of the night to join the group that has been formed to hunt down a dangerous killer. Meanwhile, in the circus tents set up on the outskirts, the sword-eater Irmy abandons her cheating clown husband and seeks refuge in a whorehouse. Following her arrest because she is considered a prostitute, she meets, at the police station, a bewildered Kleinman who has not yet understood what her role is in the manhunt, but will find out soon.

A group of people in a Midwest city, after enjoying an apparent idyllic summer,  the arrival of autumn unleash all the grudges repressed over years and years of basically forced harmony.  A woman quarrels with her husband, her daughter with her mother, reproaching her for causing her neuroses as a child and as an adult. Shes also quarrels with her best friend, guilty, according to her, of having stolen the man with whom she was in love. An elderly neighbor who has always been in love with the mother is also part of the domestic drama.

HANNAH AND HER SISTERS

Three sisters, Hannah, Holly, and Lee, live in New York. Hannah is Elliot’s wife, a tax consultant, and ex-wife of Mickey, a neurotic TV writer who left her because he thought she could not have children. Elliot engages in an affair with his sister-in-law Lee, while Mickey falls in love with Holly, a failed singer, and gets her pregnant. Lee eventually leaves Elliot for a college student and at Thanksgiving, members of the family finds themselves seemingly united and happy.

Born in 1935 in Brooklyn, Woody Allen feels he owes much of his success to radio, books, and music, which is the premise of this film.  A teenager in the post-war years, he was a fan of radio shows, as were many of his peers. Allen, as the narrator of the movie, reveals himself to be nostalgic by combining real life characters with those heard on the radio.  (elif aytemiz)