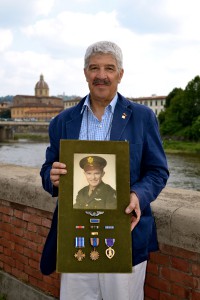 As a teenager, Marco Tofani walked past rows upon rows of 4,402 graves, each honoring a fallen World War II soldier at Florence American Cemetery. It was a Sunday in September 1962 when he and his parents first visited the historic site.

The number of pristine white crosses and Judaic stars profoundly affected Tofani, with the American flag waving high above the trees. He gravitated toward one cross in particular, marking the final resting place of Charles Spiegel.

This grave would become a sacred place for Tofani, where he would meditate on Spiegel’s heroism, which became a guiding force in his life.

“I’ve never understood or known why this happened,” says Tofani of what drew him to this particular cross, but it had a lasting effect that changed his life forever. The connection with an American hero buried near Florence began for Tofani at age 15 and continues today.

The soldier, whose family is from Hillside, New Jersey, was 22 years old when he died in a plane crash while flying for the 15th Airborne of the Army Air Corps.

For over 50 years, Tofani has returned to bring flowers and pay respects to Mr. Spiegel. “I decided from the first moment that he would be my friend,” he says.

During all this time, however, Tofani knew nothing about his friend beyond the name engraved where he was laid to rest in 1944. With the advent of the Internet, he finally had a tool to investigate. Year after year he never found anything, until he came across the soldier’s nephew—Glenn Spiegel.

In 2007, this Prato native sent Glenn an e-mail asking for more information and a photo of the man whose tomb he had visited over time. Initially, Glenn was skeptical of Tofani’s intentions, not understanding the connection to his deceased uncle.

“When I opened it, I found Marco’s message written in broken English. My family assumed it had to be one of two things: either this man was a nut, or he [was] looking for money,” said Spiegel.

After more correspondence, Glenn understood that what Tofani wanted was merely a face to put to the name. When he realized his true intentions, there was extreme gratitude and an outpouring of information, including an original photo of Charles.

“We have been corresponding ever since, and when I came to Italy at last, I brought my uncle’s three medals: the Distinguished Flying Cross, the Air Medal, and the Purple Heart, in addition to the flag that covered his casket,” says Spiegel.

“It doesn’t have a price,” says Tofani of the picture he waited over 50 years to receive. “This lifelong journey became my passion.”

“Looking at his photo, I imagined Charles’ whole life,” says Tofani. “When I saw his eyes—so blue—I looked into the soul of my friend.”

The land hosting the Florence American Cemetery in Falciani was given by Italy to the United States as a gift after the Second World War. It is open to the public daily from 9 am – 5 pm, except on holidays.