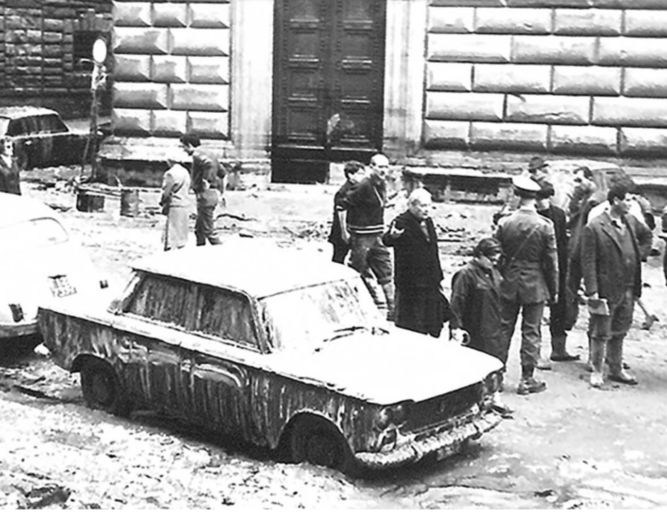 The Zeffirelli Foundation will host a special viewing of the documentary Florence: Days of Destruction to commemorate the 53nd anniversary of the flood that devastated Florence in 1966. The event will take place at the Complex of San Firenze (Piazza di S. Firenze, 5), on November 23 at 4 pm.  The cost is €10, with an archive tour to follow and aperitivo in the Zeffirelli Tea Room.

The 49-minute film is a testament to the aftermath of the catastrophic flood of the Arno, which killed 101 people and damaged or destroyed millions of rare books, artifacts and masterpieces of art. Florence-born director and producer Franco Zeffirelli was in Rome editing his 1967 directorial debut, The Taming of the Shrew, when his sister called with the news that disaster had struck his beloved city.

Zeffirelli rushed to Florence, where citizens were mourning the loss of innocent lives and attempting to salvage what they could from the surging water, heating oil and mud. Volunteers called “mud angels” set to work around the city, extracting some of the world’s most treasured works of art from the toxic soup. Priceless antiques floated down the river, Renaissance relics remained submerged for days, and the 13th century Santa Croce basilica was steeped in almost three meters of water. Gas, electricity and water supplies to affected areas were cut off and landslides obstructed roads leading in and out of the city. 5,000 families were left homeless and 6,000 stores were forced out of business.

Help poured into Florence from Italian art historians and experts, but Zeffirelli knew he needed to appeal to an international audience for the aid the city needed. The director borrowed cameras from the RAI TV station on the outskirts of the city and embarked on a photographic campaign, inspecting the central areas of Florence and documenting the widespread destruction. Soon after, he began shooting footage for his documentary to be narrated by acclaimed Welsh actor Richard Burton, who was starring alongside Elizabeth Taylor in The Taming of the Shrew.

Zeffirelli produced the film over the span of one month, adding narration by Burton in both Italian and English. The Italian version began with the introduction, “I’m Richard Burton. You will forgive my imperfect Italian, but I would like to try to speak to you without translation because what happened in Italy and in Florence concerns me deeply.”

The shocking images and Burton’s inspiring words reached the global audience Zeffirelli sought. The film prompted quick and generous responses, raising an estimated $20 million for flood relief efforts. The massive cleanup lasted years and was motivated by a worldwide desire to preserve the wealth and importance of Florentine culture, thanks to Zeffirelli’s efforts to raise awareness.

Restoration work still remains to be done, but the results of the flood established an international awareness of the need for preservation and conservation facilities. Regional officials in Tuscany organized a massive project to protect the area from future flooding, maintain high water quality, and effectively utilize water resources. Since then, the Italian government has funded many projects such as the construction of dams, tributaries and spillways to prevent river overflow.

The Zeffirelli Foundation in Florence will commemorate all this with the screening of Florence: Days of Destruction and a guided tour of its Archive following. Visitors are invited to explore the vast collection of unpublished material concerning the flood and the production of the documentary. Photographs from Zeffirelli’s personal inspection of the city, correspondences with Burton and international press reviews will be on display for guests.

Reservations are required by emailing ticket@foundazionefrancozeffirelli.com or calling 055.2658435 from 10 am – 5 pm.. The admission price is €10 per person.  (leigh van ryn)