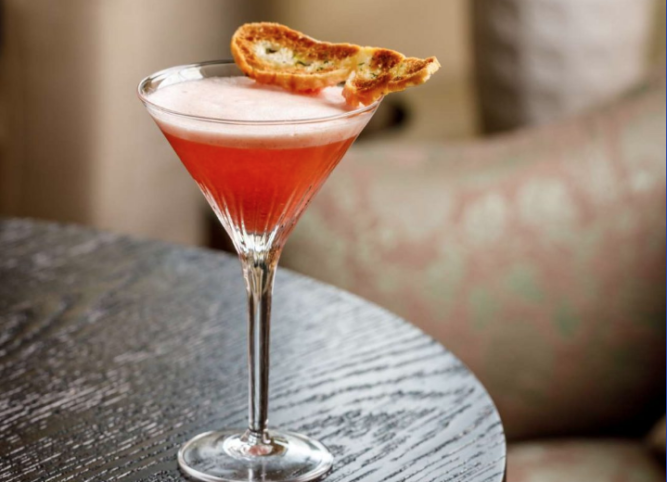 Florence Cocktail Week is an incredibly fun and immersive event that started this past September 20th and will run through September 26. There are 45 participating spots ranging from a more casual cocktail bar to hotel bars to a more classy bar and each location has their own unique creation that allows the bartenders to display their mixology skills. Try them all or pick a route to get to all the ones that sound most tasty to have a guaranteed night of fun! Below is an adapted version of La Repubblica’s mapped out route of the twenty locations participating.

Starting at Atrium of the Four Seasons hotel, where the cocktail being served is named Ciccio Pasticcio, which combines fig cordial, toasted chicory, grilled pineapple, along with a touch of whiskey, vermouth and Amaretto di Saronno. This drink sounds fitting for lovers of fruity cocktails.

Second there is the Rex, which is a historic club in Florence, a part of the high volume section. The signature cocktail here is Kaohi’ana, a Hawaiian word that means Moderation, containing amaretto and grappa, lime juice, smoked paprika and apricot syrup.

Next up is Ditta Artigianale Sant’Ambrogio, which had its grand opening recently in one of the most popular parts of the city. Their featured drink is Peter Bunny, made with Peter in Florence dry gin, carrot, radish extract, and egg white.

Then it is time for Largo 9, which is both a small pizzeria and cocktail bar, and home to Veronica Costantino who was the best bartender in 2020. Their cocktail creation is called Aurum, which is a gin-based drink infused with saffron.

Following, for lovers of seafood, there is a cocktail—the Spike Fizz— at the Empireo of the Lucchesi hotel that mixes sea urchin pulp, extra virgin olive oil, and spirulina algae. There are incredible views of the city from this hotel’s terrace.

One of the trendiest and most popular bars in the city, also considered the most international, debuts its Can-no-one cocktail, containing fermented blackberries, vodka Beluga and bourbon. Another treat for fruit lovers awaits at Locale!

Next stop also has a terrace, at the Angel roofbar & dining of the Calimala hotel. The signature cocktail here this year is the Old Tom fashioned, made with Winestillery gins and bitter spices.

Next on the tour is Paszkowski, where the bartender Luca Manni created the fun cocktail “Grap-tini”, infused with grappa, Nardini cedar water, and homemade grape cordial.

Gilli 1733 is the oldest café in the city, and Luca Picchi, one of the great bartenders known for his  Negroni, serves a cocktail called “Take your thyme,” which is a mix of tequila and bitters, lime juice and soda.

In Piazza del Duomo 1r , which has outdoor dining right next to the cathedral, as well as doubling as a new and used vinyl store, offers the drink “Dutty Passion,” with chinato bitters, Nardini cedar water and a passion fruit cordial.

Near the station, there is Piazza Santa Maria Novella, the Santa cocktail club is one of the most interesting places to see in this area, serving the Yer-Bee cocktail, combining Yerba (which is a liquor made from Mate, a synergy between Tuscany and Uruguay), vermouth, honey, banana cordial, and almond milk.

There is a rooftop bar with a spectacular view of the whole city on Ponte Vecchio, at the Continentale hotel. This drink is called Divine but courteous and, a week after the 700th anniversary, represents Dante by using Dante Vermouth, a bit of Cynar, and a citrusy homemade bitter.

At the Oltrarno, one stop is Rasputin, though it is small and hidden, meant for a more mysterious night. Bartender Daniele Cancellara has crafted the drink Botanical subversio, a play on the classic gin and tonic.

Nearby there is Gunè, which not only has drinks but also an interesting culinary aspect. Eleonora Romolini, the bartender, names her cocktail Grazia, Graziella e Grazie all’amaro, and uses the Amaro of the cyclist Casoni and the Tequila Espolon infused with pepper and chilli.

Whether making a visit to any of the stops highlighted here or trying other cocktails from participating locations, each cocktail is sure to bring a new flavor and a night of fun in beautiful Florence. Celebrate Florence by celebrating the creations of some of the most inventive bartenders, as there is a flavor for everyone!  (autumn noury)