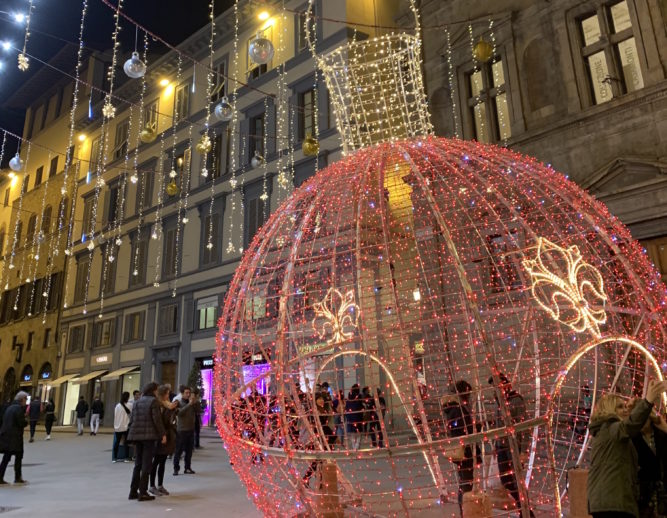 Although a favorite holiday song in the Anglo-Saxon world is the “Twelve Days of Christmas,” which focuses on gift-giving starting on Christmas and culminating on Epiphany, January 6, the holiday season is the city of the Renaissance is in full swing.  The following is a guide to a Florence Christmas countdown 2019.

Join a group of carolers who will sing around Florence’s Oltrarno neighborhood on Tuesday, December 17 from 6 to 8 pm; the meeting point is via Maggio 16 at 5:45 pm.  Bring a candle or flashlight.

An audience favorite, Puccini’s La Bohème, the love story between the young seamstress Mimì and the bohemian poet, Rodolfo, will be on stage the Teatro del Maggio, piazza Vittorio Gui 1 on December 17.  The world premiere performance took place in Turin on February 1, 1896 and was conducted by the young Arturo Toscanini.  In Florence, the Maggio Musicale Orchestra will be led by Francesco Ivan Ciampi.

The most anticipated film of the year offers an action-packed conclusion of the Star Wars epic in the final installment of the nine-part movie series that began 42 years ago.  “The Rise of Skywalker” (in English with Italian subtitles) will premiere in Florence on Wednesday, December 18 at 11 am at the Odeon Cinehall, Piazza degli Strozzi, 2.  The surviving Resistance encounters the nefarious First Order again as Rey (Daisy Ridley), Luke Skywalker (Mark Hamill) and Finn (John Boyega), the Stormtrooper turned Resistance member, continue their voyage to the final battle for freedom.  Adam Driver returns as the evil grandson of Darth Vader (Kylo Ren) and attempts to coerce female protagonist Rey to join the Dark Side.  Directed by J. J. Abrams, the diverse cast includes Lupita Nyong’o (as Maz Kanata) and Kelly Marie Tran (as Rose Tico).  Star Wars fans will be rewarded with a posthumous performance by Carrie Fisher as Princess Leia featuring previously unreleased footage from “Star Wars: The Force Awakens.”  The movie will play through Christmas.

Providing an opportunity for conversation in English, Afternoon Tea and cakes will be served at the Harold Acton Library of the British Institute (Lungarno Guicciardini 9) on Thursday, December 19 starting at 4:30 pm.  Afternoon Tea is open to all, with a suggested contribution of €2, which goes to supporting the library.

The Harold Acton Library will host several more events in English on December 19: kids and parents are welcome to listen to the magical Christmas story “Dream Snow,” at 5 pm, followed by the making of handmade Christmas cards and the screening with the film adaptation of Raymond Briggs’ holiday classic “The Snowman,” winning an Oscar nomination for Best Animated Short Film.  Non-library members can participate with the purchase of a Day Card (€6), which includes access to the Afternoon Tea.

Another special Christmas event at the British Institute, always in the Library, will take place on the 19th starting at 6 pm: readings, and carols from St Mark’s Choir.  This will be followed by mince pies and mulled wine; free entry for all.

Luciano Pavarotti’s greatest goal and success was bringing opera to the masses.  Containing previously unreleased videos of his iconic performances and interviews with friends, fans and family members, Ron Howard’s biopic of the greatest tenor of all time attempts to reveal and explore the maestro, whose beaming smile, charm and wit attracted the adulation of those he encountered. Paradoxically, he struggled with doubt and stage fright. In later years with worldwide fame and adoration, he seemed to be fighting to retain his humble roots and soul: Pavarotti could be counted on to begin a rehearsal with a huge plate of pasta.  As to his motivation to bring opera into every home, his performances joined by José Carreras and Placido, The Three Tenors, were viewed by a worldwide audience of 1.4 billion during the World Cup in Rome in 1990. “Pavarotti” will be screened in English with Italian subtitles at Cinema La Compagnia, via Cavour, 50/r on December 19 at 9 pm and Friday, December 20 at 3 pm.

Now is the time to catch a city-wide display of lights occurring as well. “F-Light” will use video-mapping, projections, light shows, and art installations to light up the city during these cold winter months.  The Le Rampe fountains at Piazza Poggi, which appears to be more like a three-tiered waterfall, will receive permanent white and colored lights on December 20, visible daily from 5:30 pm to midnight.  Built between 1872 and 1876, Le Rampe are divided into three levels containing multiple basins and water-filled grottos which are installed along the path from Torre di San Niccolò to Piazzale Michelangelo. Over the years Le Rampe fell into a state of disrepair; recently, the complex has been restored to its former glory.

For a festive evening during the holidays, the New Ballet of Toscana presents a contemporary interpretation of the one-act ballet Cinderella.  Inspired by the Brothers Grimm fairy tale set to the music of Sergei Prokofiev, choreographer Jiri Bubenicek and the Maggio Orchestra bring to life the joyful music, rich scenery and comedic roles of the stepsisters.  All ages will enjoy the story of the mistreated stepdaughter who, with the help of a little bit of magic, is transformed into the princess she was meant to be.  The ballet is scheduled on December 20 at 8 pm at the Teatro del Maggio, Piazza Vittorio Gui 1, Florence.  For info and ticket purchase see the Maggio Fiorentino website, go to the ticket office at the Santa Maria Novella tourist information office or the new Maggio holiday box office (through December 23) in the shopping gallery below the Santa Maria Novella station.

Founded in 1288, the Santa Maria Nuova Hospital will open its museum itinerary on Saturday, December 21 from 10 am to 1 pm, 3 – 5 pm and host a concert.  Some of the masterpieces come from the hospital’s church: a beautiful crucifix by Andrea del Castagno; two frescoes by Bicci di Lorenzo and Gherardo di Giovanni; in addition to a most unique and moving treasure: a small tabernacle by Bernardo Rossellino and Lorenzo Ghiberti.  At 5 pm in Santa Maria Nuova’s Salone di San Martino, the Musica Ricercata Ensemble will play 16th century madrigals by such musicians as da Palestrina, di Lasso and Monteverdi.  While the events are free, donations are welcome.

The Nutcracker will be interpreted by the talented dancers of the Saint Petersburg Classical Ballet Tradition at Teatro della Pergola on December 21.  The well-loved Christmas fable showcases the music of Tchaikovsky and choreography by late 19th century St. Petersburg native and ballet master Marius Pepita. There will be a matinée at 4:45 pm, while the curtain will rise on an evening performance at 8:45 pm.

The majestic yet soothing sound of Gregorian chant, interpreted by the Viri Galilaei Choir, will fill the church of San Miniato al Monte on December 21 at 5:30 and again at 6:30 pm.

The third day before Christmas (Sunday, December 22), marks the last time to visit the German Christmas market in piazza Santa Croce.  This traditional market is one of the city’s time-honored Christmas gems.  Visitors wander from wooden stall to wooden stall, enjoying a centuries-old model of marketplaces in northern Europe. Stocking stuffers abound, including jewelry, ornaments, handmade toys, sweet treats such as strudel and holiday stollen (fruit cake) – all of which add a decidedly Deutsch twist to holiday shopping.  10 am – 10 pm.

Last minute stocking stuffers can also be found at the outdoor Advent Market in the Cascine Park on the morning of December 22.

The Brancacci Chapel offers free guided tours by flashlight (bring your own) on December 22 between 1 – 5 pm.  The illumination will help the viewer discover details of the groundbreaking Renaissance frescoes by Masaccio, Masolino and Filippino Lippi that would be easy to overlook.  Sunday museum admission is €10, and reservations are required at 055 2768 224 or 558; or email info@muse.comune.fi.it.

This week’s Christmas countdown will have its grand finale with a Christmas Carol service at St. Mark’s Anglican Church, via Maggio 16, from 6 to 7 pm on December 22.  (rosanna cirigliano/ additional reporting by rita kungel & anne lokken)