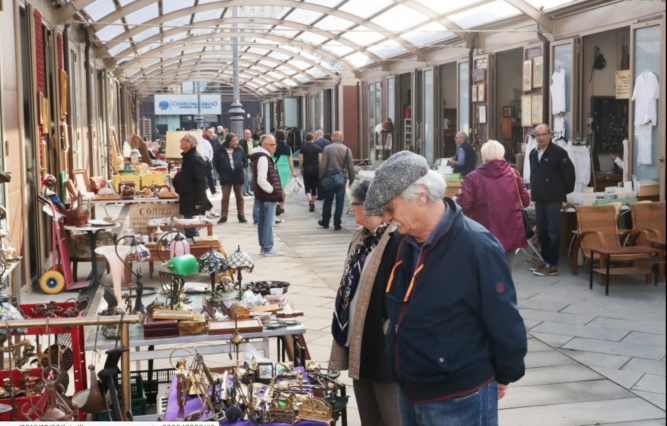 Florence’s flea market (mercato delle pulci), formerly located in Piazza dei Ciompi, inaugurated its new home in Largo Annigoni on October 26, 2019. The glass-and-steel structure, divided in two pavilions joined by a covered walkway, hosts 26 stands.  “This new warm and welcoming venue is modern, and represents the beginning of another chapter for dealers with their vintage items and bric-à-brac as well as for customers who come to make their purchases,” said Florence mayor Dario Nardella. “It also represents an opportunity for tourists to discover a neighborhood outside the city center.”

The dealers were forced to move from their traditional Piazza dei Ciompi location due to the fact that the roof there was heavily composed of asbestos.

Twenty-six alcoves, vaguely resembling booths in Boston’s Faneuil Hall Marketplace — but more intimate and less commercial —  including outdoor spaces in the galleries plus a rest room and an info point, comprise the complex, which were constructed at a cost of a million euro.  Illuminated by lanterns atop tall, wrought iron lampposts which give the area a vaguely Parisian feel, the flea market, which is open Monday through Saturday, occupies 50% of the space in Largo Annigoni, across from the entrance to the Architecture School of the University of Florence.  (rosanna cirigliano)