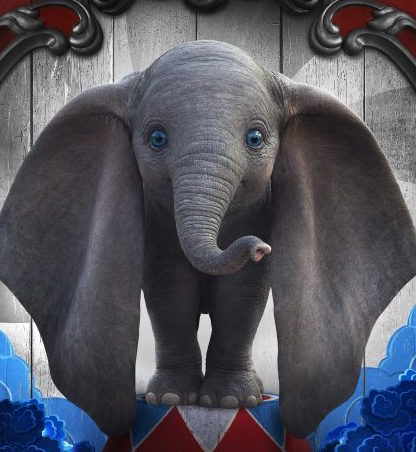 The April films at the Odeon Cinema begin with a reimaging of a 1941 Disney classic, Dumbo, a poignant story about a flying baby elephant and those who love him and also those who wish to exploit him.  Next a historical drama about a peaceful pro-democracy rally marred by violence in Peterloo.  The Aftermath, a period drama about a wartime romance stars Keira Knightly and Alexander Skarsgård.  Then a biographical drama based on James Murray, Scottish lexicographer, and editor of the Oxford English Dictionary, The Professor and the Madman.  The final week of the month, the Odeon, offers a Marvel Studios superhero movie The Avengers: End Game.  All films will be screened in English with Italian subtitles.

A struggling circus owner Max Medici (Danny DeVito) hires a former star, now a disabled veteran, (Collin Farrell) and his two children to care for Dumbo, a baby elephant born with huge ears.  The children teach Dumbo to fly and he becomes a sensation, revitalizing the down-and-out circus. Enter villainous impresario, V. A. Vandevere, played by Michael Keaton, and Dumbo’s future becomes uncertain.  Directed by Tim Burton, the characters will intrigue most audiences.

Directed by Mike Leigh, this historical drama is based on the Peterloo Massacre which occurred in Manchester, England in 1819, when cavalry charged into a crowd of 60,000–80,000 who had gathered to demand the reform of parliamentary representation.  Starring Rory Kinnear, Maxine Peake and Tim McInnerny, the film tells the familiar story of class conflict in times of political change.

Keira Knightly portrays a British Army colonel’s wife who joins him in the dead of winter in the ruins of 1946 Hamburg, Germany.  Her husband, the gentlemanly and optimistic Lewis Morgan (Jason Clarke) is charged with rebuilding the city after the war.  She discovers they will be sharing a grand house with its previous occupants, a German widower (Alexander Skarsgård) and his troubled daughter.

The life of Professor James Murray (Mel Gibson) is portrayed as he works on compiling words for the first edition of the Oxford English Dictionary in the mid-19th century.  He collaborates with a doctor (Sean Penn) who submitted over 10,000 entries while he was undergoing treatment at an asylum for the criminally insane.   The film was directed by Iranian-American Farhad Safinia and filmed in Dublin, Ireland.

The fourth in a series, the Marvel Comics superhero team Avengers assemble after the devastating events leaving the universe in ruins.  With an all-star cast of Robert Downey Jr., Scarlett Johansson, Chris Evans, Bradley Cooper, Mark Ruffalo, Brie Larsen, Josh Brolin and Chris Hemsworth, fans of the series will be keen to see if they manage to undo evil Thanos’ chaos and restore order to the universe with one final stand.  (rita kungel)