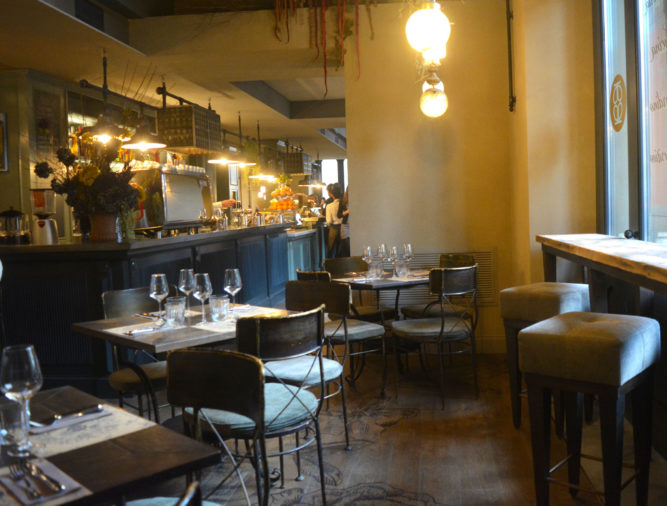 Thanks to designer’s Roberto Cavalli’s nieces, Florence’s historic Caffè Giacosa, which recently closed, is the inspiration for the brand-new Caffè Lietta.

Reimagined by two sisters, Francesca and Lucilla Tacconi, Caffè Lietta opens as a remake of their uncle’s Caffe Giacosa, with a new appearance now combining both nature and urban influences. Keeping the original Giacosa staff, from the pastry makers to the chef, the two women hope to maintain the long and precious legacy of the café, while also adding their own unique touches.

Caffè Giacosa opened in 1815, and it was there that the Negroni cocktail was invented during the 1920s. In 2002, from marble to wood, Roberto Cavalli modernized the historic café, replacing the marble counters and floor with wood, and reopened it alongside his clothing store.  Fifteen years later, both boutique and café closed. Now entering its third life, visitors can find traces of its previous reincarnation, such as the original wrought iron chairs, and even sip a warm beverage from the actual porcelain cups from Cavalli’s version of Caffè Giacosa.

Influenced by their mothers love of nature, and the beautiful historic greenhouse up the road, the the Francesca and Lucilla Tacconi sisters united with the mission the café back to life.  They dived headfirst into the project, hoping to hope to create a warm and welcoming atmosphere, a place for breakfast, lunch, and aperitivo.

In designing they were helped by an architect, but did most of the work themselves, from buying items at antiques markets and even upcycling the cafés’s original wooden stools that stand inside the front entrance. The interior merges the industrial urban style of iron and hanging lights, with the natural hanging plants and greenery wall, all influenced by the nearby greenhouse from the 20s.

With seasonal menus, and fresh bouquets prepared by Lucilla’s daughter, the café gets its charm from the historic elements, family, and the artistic work of the two sisters.

Only the freshest and most natural ingredients go into the food, from the eggs, milk, to the fresh made bread and homemade wine. From Caffe Giacosa is chef Nicola Chellini, pastry chef Giuseppe Schiaratura, and barman Riccardo Banducci’s expertise. Original recipes will be carried on as well, such as the traditionally made “grandmothers cake” (torta della nonna) and “pirulo,” their signature pastry, which is a taller version of “budino di riso” featuring a special ricotta, chocolate, or pistachio pudding filling instead of a budino’s traditional rice pudding.

Though they had originally hoped to be more downtown, the sisters loved the space of the new location, and Cafe Lietta is the only café on that side of piazza Libertà. New adjustments provide the option of taking food to go, as well as sitting down for lunch at nice table, or taking aperitivo. Below the the cafe is also a space they will hold hold workshops, tastings, and private events for 20-30 people.

The two sisters have five kids — all women — who build on the feminine inspiration provided by the mother and grandmother, Lietta Cavalli. Her artistic work in fashion, and love of flowers and nature has given the new incarnation of a historic café its name and soul.  (nicole grant)