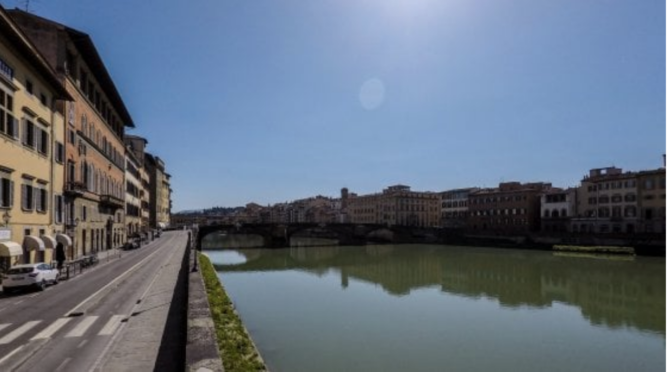 One by-product of the nationwide lockdown implemented in Italy has been the significant decrease in the levels of air pollution. Florence has benefitted from a week of reduced traffic with little or no cars on its roads, and nitrogen dioxide levels in the city have thus fallen considerably.  Dario Nardella, Florence’s mayor, posted on social media that “traffic has fallen by almost 70%” and that with the vast majority of people staying at home, “nature is thanking us.”

Florence is not alone in recording such reductions in greenhouse emissions. The north of Italy, especially regions such as Lombardy and Veneto which have been under quarantine for longer than the rest of the country, has reported similar findings after, in certain areas, almost a month of restrictions such as the closing of schools and cancellation of public events. Satellite images taken by NASA and the European Space Agency at the start of March show the same has been happening in China, where nitrogen dioxide levels have dropped by 30%.

On another note, Publiacqua, Florence’s main water service office, is closing its offices until April 3. This measure has been taken to limit contact and physical interaction between both employees and customers as part of the effort to tackle the emergency of the coronavirus. Publiacqua will still be reachable by telephone on 800 238 238 (from landline phones) and 055 0518080 between 9 am and 6 pm during the week and 9 am and 1 pm on Saturdays. There is also the option of consulting the online information point, MyPubliacqua, on the website (www.publiacqua.it) or through the Publiacqua App.

On March 18, Publiacqua also shut down all the free distribution of mineral water (both still and sparkling) available at dispensers located in 18 squares throughout the city as far as Galluzzo, and at another 20 locations throughout the province of Florence (from Reggello to Bagno a Ripoli and as far west as Signa) for the duration of the Covid-19 emergency. (alfie king)