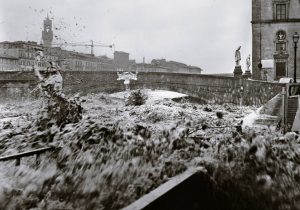 To mark the 50th anniversary of the great flood, Florence this week offers a rich program of events that recall the tragedy and the world’s response.

While commemorations last well into November (see below), capping the 50th anniversary on the actual day, November 4, is a soft-lit torchlight parade (8 pm) from San Miniato to Santa Croce open to all. The procession represents a joint crossing of the Arno into the heart of Florence. This moment honors those who lost their lives while also symbolically standing for the collective of everyday men, women and youth who came together from all corners to help Florence.

The historic flood can be summed up in a few lines: few enemies have ever attacked a defenseless city so treacherously or more viciously, not from the outside, but at its heart. The enemy of Florence that day was the river Arno,

the time before dawn. Swollen by days upon days of solid downpours, the situation worsened with the last minute opening of gates of upstream dams about to burst open.

What happened in those few hours before daybreak defies imagination. Thick, muddy water, moving at 50 mph, rapidly filled the streets and squares of the city.  Left temporarily homeless, Florentines had to deal with effects ranging from the destruction of their businesses and shops to the many artworks that were damaged, some beyond repair.

A free virtual tour allows the viewer to relive those moments at the city’s Biblioteca Nazionale (National Central Library, Piazza dei Cavalleggeri, 1). Tablet in hand (by reservation at 3346606716, November 4 – 26), the visitor is directed to frame markers that activate a sequence of photos, recorded dialogue and short films, that, step-by-step, bring the past to life (in Italian with English subtitles).

The viewer becomes a dramatic witness to a sequence of events, which include the arrival of “Mud Angels,” international volunteers who, besides sweeping mud from the pavements of churches, formed a human chain to retrieve the thousands of the National Central Library’s books that suffered water damage.

An app is also available to continue the tour throughout the city (for information, call above number).

Conserving and safeguarding national patrimony continues to be a timely theme, and deliberate destruction, such that which took place in Palmyra as opposed to the accidental destruction of the flood, will be examined in the November 3 symposium Protecting Cultural Heritage in an Uncertain Time (9 am – 1 pm at Palazzo Vecchio, reservation required at www.unityindiversity.it/register-2016-edition).

The seminar will take place during the annual Unity in Diversity Global Mayors Conference.  Sponsored by NYU with the Friends of Florence, a non-profit that helps finance restoration laboratories, it offers a chance to frame the importance of art, art as culture and preservation efforts before the upcoming anniversary.  Topics examined include propaganda and destruction; parallel case studies from natural calamities; strategies to control illicit trafficking of art; and looted antiquities.

The human aspect of a disaster is in the forefront at the historic home of Piero Bargellini (via delle Pinzochere 3, near Santa Croce).  One display are many handwritten or typed letters from residents asking help of Bargellini, Florence’s mayor during the flood – in an era when the historic center was home to the Florentines.  The Voices of the Flood, as the exhibition is called, provides a precise record, at the same time, moving.  Individual portraits emerge in contents handwritten or typed, spanning generations from elementary school students to senior citizens.

With funds also from donors channeled through the American Chamber of Commerce in Italy, Piero Bargellini was able to respond to requests for a mattress, for heaters, or equipment – such a sewing machine – needed to return to work.  “Voices of the Flood,” comprising photos and historical memorabilia, is open to the public through November 13 (free admission, reservation required at 055/241724 or 335 6878554.

Testimony will continue on Ponte Vecchio where video mapping of historical flood images from the Locchi Archives will be projected nightly from November 4 -18.  The installation will concentrate on what occurred at Florence’s oldest bridge, rebuilt in 1345 after an inundation that destroyed it.

As Laura Piccini, proprietor of Fratelli Piccini on Ponte Vecchio and who saw the flood’s arrival through Piazzale Michelangelo’s overlook binoculars recalls, “the sound was deafening.  The waters swept away all the goldsmith’s shops but ours: recently restructured: the tide smashed and poured through the windows and miraculously our safe was the only one on the bridge to remain intact.  When waters receded, looters appeared to look for jewelry floating in the Arno.”

Piccini also recalls “a sense of anguish” which pervaded the city during the first moments, which can be experienced in a series of movie screenings scheduled on November 4 at Cinema La Compagnia (via Cavour 50/r).  The retrospective begins with 241 Chilometri al mare (5:30 pm), recounting the flood from mountain areas to the sea; Dopo l’Alluvione (6:30 pm), which focuses on the mud angels and their work; and two documentaries, Firenze, novembre 1966 (9 pm) and Camminando sull’acqua (9:30 pm).

A commemorative mélange of photography and art, Alfabeti Sommersi, is showcased in Palazzo Vecchio’s Sala d’Arme.  World premiere screenings of a super 8mm color documentary by Beppe Fantacci, who helped find relief donations in the U.S., take place in a setting of contemporary art.  A creative reinterpretation of the flood’s resonance, the mixed media works — a blend of earth, water and color — were created by Anselm Kiefer and Emilio Isgrò.  Early in his career, the latter volunteered as a mud angel (Nov. 1 – 11, open 11 am – 7 pm, free admission).

Those wearing badges seen around the city are visiting Mud Angels. They represent people of all ages and corners of the globe who came to Florence’s aid.  The largest group is comprised of 45 alumni of Florida State University’s 1966 Florence program. They, along with others who worked at the Biblioteca Nazionale, museums and health centers, will be commemorated in Palazzo Vecchio on the morning of November 4.

As alumna Layne Ferguson remembers, “Immediately after the flood, there was so much mud and so much to clean up that it was heartbreaking. People’s faces wore shock and sadness and loss. Instead of the ever-present jumble of Italian voices talking, singing, and arguing, there was near silence.”

A silent symbol of the flood was — and is — the basilica of Santa Croce. It contains a globally renowned painting, Cimabue’s wooden crucifix (1280), which introduced realism in art but which suffered substantial damage to become the icon of the catastrophe. It will be visible to the public during the unveiling of Vasari’s newly restored Last Supper in a ceremony at Santa Croce presided by Italy’s president, Sergio Mattarella (November 4, 3 pm).

Decades after have been submerged in water, the five panels composing the work have been reassembled on a permanent support and painting surface has been recovered. Begun in 2010, the complex project was a joint effort of the one of Italy’s most prestigious restoration laboratories, the Opificio delle Pietre Dure, and the Getty Foundation.

Bruno Santi, current director of the Opificio delle Pietre Dure, will also give a presentation at the British Institute Library on November 9 (Lungarno Guicciardini 9, 6 pm).

His talk (in Italian), entitled The Florence Flood: the Destruction and Resurrection of a City, is an eyewitness account also highlighting far-reaching subsequent damage not yet entirely dealt with.

These events are a once in a lifetime opportunity to experience unprecedented international unity in Florence and the city’s rebirth. (rosanna cirigliano/additional reporting by jordan siccardi)