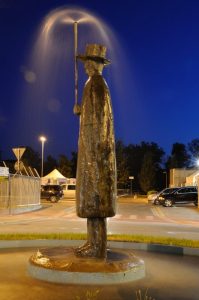 On May 16, Mayor Dario Nardella submitted a Facebook survey asking citizens for their opinions on the relocation of Jean-Michel Folon’s “Rain Man.” The Belgian artist’s statue had twice been damaged in 2015 and in 2017 by motorists at the roundabout in front of the Obihall theater in via Fabrizio de André.  Considering that the work had been recently refurbished, the mayor proposed moving the beautiful figure to one of two safer, more prominent locations in the historic center.

The suaveness of the Folon Rain Man, with his Sherlock Holmes trench coat, rain boots, top hat, and umbrella tempted  Florentines to sway from tradition. Votes flooded in, and in less than 24 hours, the mayor announced that the citizens had decided against moving the contemporary statue to the historic Piazza del Carmine or to the Piazza dei Ciompi near Sant’Ambrogio in the Santa Croce neighborhood.

The bronze sculpture had been donated to Florence in 2002 during the European Social Forum. Nardella maintains that although it will return to its former vulnerable position near the Varlungo Bridge, measures will be taken to protect both the statue and motorists from harm’s way.Twelve of Folon’s bronze and ceramic statues reside between the roses of the Giardino delle Rose near Piazzale Michelangelo. “Partir” depicts a suitcase which creatively frames Brunelleschi’s dome, Giotto’s Campanile, the Church of San Lorenzo, the Palazzo Vecchio,  and other notable aspects of the Florence skyline. Additionally, Folon has had works exhibited around the Tuscan region, including at the Palazzo Vecchio and the Forte di Belvedere.