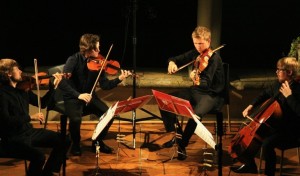 Join Florentine church communities throughout the summer months for free classical and choral music concerts. They will host musicians of all ages from all over the world, including students from the Hotchkiss School in Connecticut and multiple schools in the United Kingdom. The European Youth Orchestra Festival, a multicultural celebration with groups in attendance also from the US and South Korea, will offer free performances as well, demonstrating music’s unifying power.

There are two shows on June 30: at the first, Leonel Morales with Giuseppe Fricelli and Daria Aleshina will be playing Rachmaninov, Stravinsky, and Moszkowski on piano at St. Mark’s (6 pm). Later, three Fiesole Music School string quartets will take to the 15th century courtyard of the Church of San Salvatore al Monte, filling the open air with the sounds of Beethoven, Bartok, and Mendelssohn (9:30 pm).

The next day begins at 4 pm when the Kew Green Preparatory School Choir will perform at St. Mark’s, directed by Helen Birchall (July 1). This will be followed by Chiara Morandi and Fabio and Gisele Witkowski on violin and piano, respectively, treating listeners to Grieg, Rachmaninov, Liszt, and Franck (Church of Santo Stefano al Ponte, 8:30 pm).

The Durham University Choir will give their rendition of Sibelius, Bruckner an Grieg at the Church of St. James on July 2 (via B. Rucellai 9) at 7 pm.  The American Spartanburg Youth Orchestra, conducted by Jeffrey Kuntz, will arrive at Loggia dei Lanzi to play Debussy, Rimsky-Korsakov, Verdi, and Puccini on the same evening (9:15 pm) as part of the festival; next on the program is the Youth Orchestra of Tulln Austria, conducted by Hans-Peter Manser, featuring Mozart, Beethoven, and Rossini (July 6, 9:15 pm).

There are options for venturing out of Florence as the weekend begins: on Friday, July 3, head on out to the Tuscan countryside where St. Mary’s College Choir will sing Victoria, Aylward, and Bruckner at St. Peter’s Church in Siena (Via Garibaldi, 32). Alternatively, take the tram to Scandicci, stopping at Resistenza, to listen to the Accademia Europa del Quartetto at the Acciaiolo Castle (8:30 pm). Slow-food dinners will be available upon reservation (contact 3482865659 for more information).