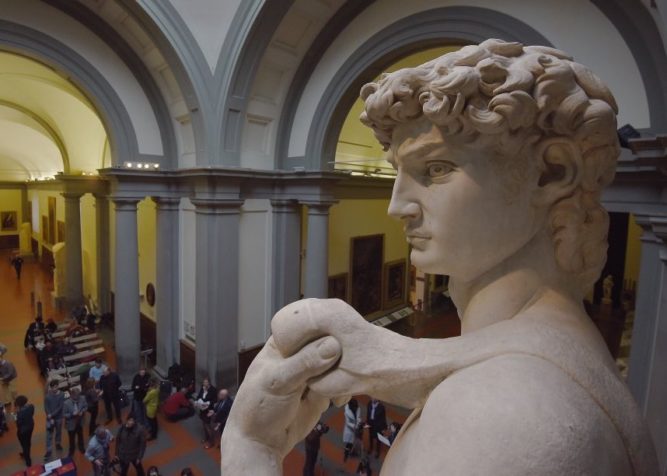 November brings a free week for visitors to the Accademia Gallery:  the museum is accessible at no charge to all from Tuesday, November 5 to Sunday, November 10.  Hours are 8:15 am to 6:50 pm.

The Accademia is home to Michelangelo’s iconic nearly 17-ft.-tall David, as well as his Slaves, which line the hall to his masterpiece.

Many people who visit Florence to see an exceptionally famous piece of Carrara marble think Michelangelo personally selected the block in the quarries.  Another legend has it that, during the Renaissance, sculptor Agostino di Duccio abandoned the pure white block of stone once he had roughed out his figure in a faulty manner, where it sat in the courtyard of Florence’s Cathedral for 35 years before being given to Michelangelo.  In 1966, however, Charles Seymour Jr, wrote a book entitled Michelangelo’s David: A Search for Identity based on a review of original archival documents that challenge much of Giorgio Vasari’s narrative in his Lives of the Artists (1568).

According to Seymour, documents show that in 1464 the intent was to create a giant marble David for the roofline buttress of the Florence Cathedral (Duomo).  The design for commission was awarded to Renaissance great Donatello (by then 80), but to be sculpted by the younger, stronger hands of Agostino di Duccio.  The documents do not suggest, as legend would have us believe, that Agostino walked off the job in 1466; rather the contract ended in December of that year, following the death of the directing sculptor, Donatello.

Vasari tells us that on January 25, 1504, Michelangelo was adding the final touches to his “Giant” (as the David was also called).  At that time, a committee which included Filippino Lippi, Sandro Botticelli, Leonardo da Vinci, Antonio da Sangallo, as well as other artists, artisans and citizens, decided that it was too great a piece of art to be place high up on Florence’s Cathedral as part of the Prophets series. They decided instead to put it outside on the steps of Palazzo Vecchio, Florence’s city hall, where it remained for over three centuries.  The statue found a new, permanent home indoors at the Accademia in 1873, where it remained even during World War II, hidden and protected by sandbags. (rosanna cirigliano, reprinted courtesy of Vista, Florence & Tuscany, copyright 1997-2019).