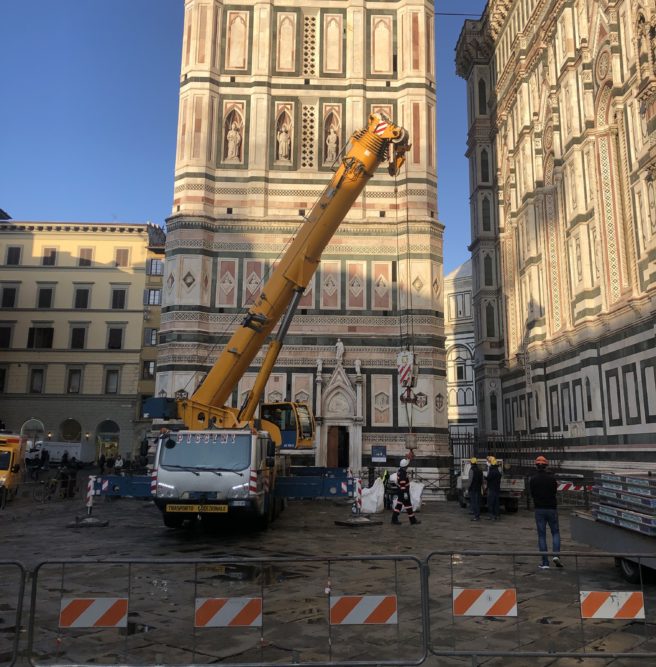 The bells in the Giotto tower (Campanile) located in Piazza Duomo will not be ringing for most of November, due to degradation of their structure over the past several hundred years. Bell tolling will be halted until November 26, and the tower itself is scheduled to be closed to the public on November 25 and 26.

The major bell of the tower inside of Giotto is called Campanone or Santa Reparata, named after the Catholic martyr, and was cast in 1475. It continues to be one of the largest active bells in Italy, with a two meters (6 and 1/2 ft) diameter, 215 centimeters (7 ft.) height and weight of five tons.  Its metal was recast (melted down and reshaped) in 1705, 230 years after its initial construction, since it had some cracks through its surface.

Recent investigation have deemed it necessary to rotate the bell so that it can sustain more strikes from the clapper. Whenever the clapper wears through 10% of the bell’s thickness, it is slightly rotated so that a new section can be hit. This turning in particular will be the last time the bell can take dents from ringing before it needs to be recast. This maintenance intervention is being commissioned and carried out by the Opera di Santa Maria del Fiore, with help by the owner of A.E.I, specialized in the maintenance of bells, Claudio Perego. Claudio said that it is unknown when Santa Reparata was last rotated, but it should have occurred back in 1956 and 1957 when the part of the wooden interior of the belfry, where the bells are housed, was replaced by a metal structure.  Giotto’s bell tower, made of white, green and pink marks, stands 65 meters (213 ft.) high in the city center.

The tower contains 12 bells in total, five of which are unused as they are the oldest, and seven active bells which include Santa Reparata. The names of the other six bells are the Apostolic, the Annunziata, the Mater Dei, the Assumption and the Immaculate Conception. Ringing is normally scheduled as a call to prayer at 7 am, 12 noon and an evening hour that varies according to solar time.  (nelson matos)