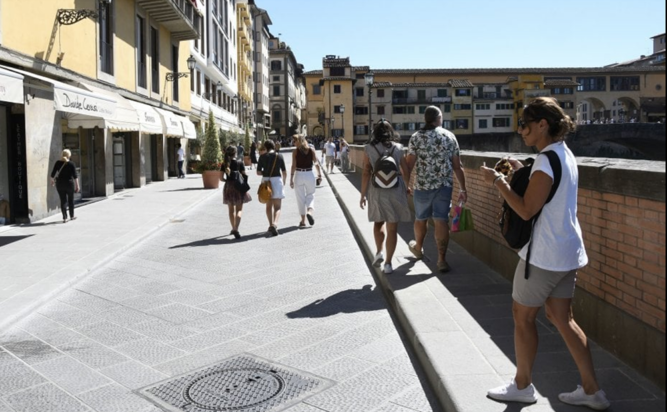 Three roads along the Arno River near Ponte Vecchio — Lungarno Acciaiuoli, Lungarno Archibusieri and Lungarno Anna Maria Luisa de’ Medici — have become off-limits to car and bus traffic and open only to pedestrians, people on bicycles, horse-drawn carriages and a limited number of authorized vehicles (police cars, ambulances and street cleaners) starting the first weekend of September 2020.  Residents and those delivering goods to businesses will have access between 6 and 9 am, with residents again allowed in from 6 to 8 pm.

Florence mayor Dario Nardella explained the pedestrianization will not only decrease air pollution and traffic but also protect the most beautiful and artistically important areas of Florence: mainly the Uffizi Galleries. This announcement comes after Nardella’s project #RinasceFirenze, which outlines how to make Florence a greener city among other goals.  Although there were be fewer vehicles on the road during the pandemic, before COVID-19 almost 8,000 vehicles passed under the Vasari Corridor every day, totaling two and a half million a year.

The mayor said that this initiative is a turning point for the Municipality as it will complete the pedestrianization of Piazza Duomo, Piazza Pitti, and Via Tornabuoni which began a number of years ago. Part of the project aims to pedestrianize Lungarno Corsini in the future; for the moment the section between Ponte Santa Trinita and Ponte Vecchio excludes cars and motorbikes from one of the most famous glimpses of the Ponte Vecchio. The pedestrianization took place in two separate phases, with the Lungarno Acciaiuoli not reopening to traffic after the inauguration of new stone pavement on July 22, and traffic shifted to other streets including Via Tornabuoni for those who are authorized to use these roads. With the more recent pedestrianization of Lungarno Archibusieri and Lungarno Anna Maria Luisa de’ Medici, this resulted in new routes, forcing vehicles to drive towards Piazza dei Giudici The alterations of these routes will increase a six-minute journey by four additional minutes. Despite this slight inconvenience, director of the Uffizi Galleries Eike Schmidt let out a sigh of relief as there have been concerns in the past about the impact of traffic near the most important museum area in Italy.

Cyclists also sigh in relief, as the new cycle paths in the same area will become less trafficked. While motor vehicles were advised not to use these cycle paths as shortcuts to go from one part of the city to another, some drivers disregarded this updated rule and drove faster than the 30 km (18 mi) per hour limit.

Others, however, remain concerned about how this initiative will impact the city. Although many support the “green revolution” that has swept through Palazzo Vecchio and the city as a whole, new regulations in traffic flow will impact taxi drivers, explains the president of Uritaxi Claudio Giudici who calls for attention in this sector. Simone Andrei, president of Socota, agrees and explains that taxi drivers need fluidity to function well. Due to the increase in the length of driving routes, customers will have to pay more for a taxi ride, which is not ideal during a difficult economic moment.

Businesses themselves support pedestrianization, explaining that as long as vehicles can unload goods and drop off visitors, boutiques, restaurants, and shops will not be harmed. Lucia Papini, the owner of a historic leather shop, explains that street vendors cause more stress than more traffic or accidents. Meanwhile, the owner of Nadine boutique hopes for the removal of parked mopeds right in front of the shop window. Other business owners want instead attention to be given to addressing drug dealing in a nearby alleyway and illegal street vendors who they say torment them.

While the pedestrianization of the Lungarno Acciaiuoli, and Archibusieri is well-intentioned in its promise to make Florence a greener city and to preserve a historical area, others worry about how this infrastructure project will impact their business. Longer commutes and traffic in new areas is not the ideal atmosphere for different sectors to welcome change, but hopefully, people can come together to realize the importance of sustainable action and brainstorm how businesses can remain afloat.  (elizabeth berry)