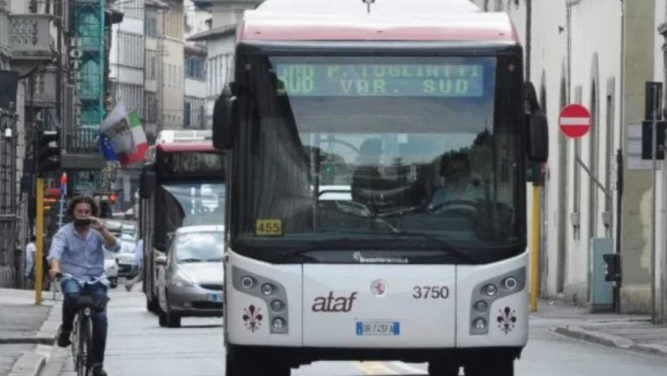 ATAF, alongside Tuscany’s other bus companies such as CAP, CTT Nord and Tiemme, will soon become an assimilated subsidiary and with it will come some changes to the transport system. ATAF, Florence’s 76-year old bus company, will now be run by Autolinee Toscana, which is the Tuscan bus branch of the RATP group, a French-based public transport operator. This is the same company that owns Gest spa, which manages the tram system in Florence.

The changeover will occur on November 1, meaning that October 31 is the last day that ATAF tickets & vouchers can be used. Seasonal and annual bus passes will remain valid until their expiry dates. If a ticket has been unused and purchased since July 1, 2018, it can be refunded before November 1.  Refunds can be obtained on October 29 (until 7:40 pm), October 30 (6:50 am to 1 pm) at the via Alamanni 20/r ATAF ticket point and from November 2 to January 31, 2022 at Santa Maria Novella Station help desk numbers 8 and 9.  If the value of the tickets that you wish to return exceeds €50, then you must bring your IBAN number and other bank details in order to receive your money.

Management by Autolinee Toscana will also mean that individuals travelling between provinces in Tuscany will not have to deal with a different company for each place they travel to. Up to now, ticket or bus passes for ATAF in Florence did not work for busses in Prato, since they operate under a separate company called CAP; the same is true in the other provinces. Given that all of Tuscany’s transport operators will be a part of Autolinee, customers can travel throughout the region without any hassle from dealing with a different company in each major city they visit.

Jean Luc Laugaa, CEO of Autolinee Toscana has commented that these changes are done to make sure that individuals who frequently use ATAF will not notice anything significant during this transition, as well as granting ease of access to all users during the period of transferring control to the RATP group. Autolinee assures that they do not wish for this change to affect existing bus stops, ticket prices, vehicles, transport lines or timetables.

Tickets will be classified into three types. The first of these is the green capital ticket, which cost €1,50 for 90 minutes of transport that is valid for the capital of each province in Tuscany (Arezzo, Florence, Grosseto, Livorno, Lucca, Massa-Carrara, Pisa, Pistoia, Prato and Siena). The second type is the orange urban ticket, costing €1,20 for 90 minutes for 18 municipalities (Cecina, Certaldo, Chianciano, Chiusi, Colle Val d’Elsa, Empoli, Follonica, Montecatini, Montepulciano, Pescia, Piombino, Poggibonsi, Pontedera, Portoferraio, Rosignano, San Gimignano, Viareggio and Volterra). The third ticket type is the blue suburban, whose cost will depend on the distance and time that the passenger takes. This particular ticket type will remain valid for seven days after purchase.

Just like before, physical tickets can be purchased from official ticket offices along with bars, tabaccherie and supermarkets certified by an Autolinee Toscana sticker. For those who prefer using cellular credit, phone users under the providers TIM, Vodafone and WindTre can receive an SMS by paying €1,80 for an urban bus and tramway ticket. This is done by texting the name of the city you’re in at 4880105, such as “FIRENZE” or “PISA”, which differs from the previous method of typing “ATAF” to the number. Alternatively, tickets can be bought from the TABNET app for smartphones with the use of a credit card.

After November 1, to acquire a new bus pass, users must register a new account on www.at-bus.it and insert details such as their codice fiscale (Italian social security number), carta d’identità (Italian ID card), tessera sanitaria (Italian national health card), along with additional information to acquire a potential discount such as that for students. After registration is complete, a monthly, seasonal or yearly pass can be purchased. Since these are connected to the customer’s account, all that needs to be shown to ticket inspectors is your health card or codice fiscale card to verify that you have a pass. (nelson matos)