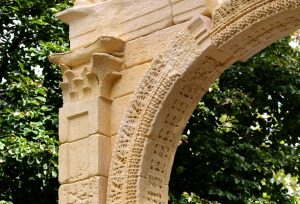 The G7 Culture Summit is bringing more than just Ministers of Culture to Florence this year. While March 30 – 31 marks the meeting of cabinet members from Germany, France, the US, Japan, Canada, the UK, and Italy, starting this week Florence will be home to special exhibitions lasting more than a month following the event.

Coming to Piazza della Signoria March 27 to April 27 is a 1:3 scale model in Carrara marble of the lost Arch of Palmyra — a third century artifact destroyed by ISIS militants in October 2015. A window into architecture and design from one of the first civilizations, the loss of the masterpiece was an immense blow to the world archeological and art communities.

The idea of the replica came from within Tuscany. TorArt, a contemporary art studio in Carrara that focuses on sculpture work, used advanced technology to recreate the Arch to the highest point of detail in material as close to the original as possible to uphold its cultural value. A 3D design created with the help of hundreds of photographs enabled Carrara artisans to reconstruct the historical work.

Before arriving in town, the Arch of Palmyra has been exhibited in both London’s Trafalgar Square and New York’s City Hall Park. The world tour of the new “ancient” masterpiece is also a chance to shine an international light on the importance of preserving the cultural identity of humanity.

Thanks to “The Million Image Database,” the Institute for Digital Archaeology in collaboration with UNESCO and the University of Oxford, a perfect reproduction of the original using some of the recovered original materials is also underway.

Inside the Palazzo Vecchio the famous Chimera of Arezzo — an Etruscan bronze sculpture of a roaring lion distinguished by the head of a goat and a snake riding on his back — will be transferred from the Archeological Museum to the Sala Leone X. This is the room where Cosimo de Medici I had originally displayed it after it had been discovered in the mid-16th century.

A few blocks away, the crypt of Santa Croce will be the venue of a show by contemporary artists from each of the seven nations represented at the Florence’s G7 Culture Summit. The exhibition, curated by Dr. Melanie Zefferino, will be unveiled on March 28 and will be open to the public with free admission until April 17.

The featured artists include French photographer Jean-Pierre Rousset, Japanese artist Yasumichi Nakagawa, and American sculptor Romolo Del Deo — each of them bringing their own sense of cultural identity and cosmopolitan viewpoint to the G7 of Art, an event in of itself that allows people of all cultures to frequent and understand one another.

The Uffizi is hosting Facciamo presto! Marche 2016 – 2017: Tesori Salvati, Tesori da Salvare, (Treasures Saved, Treasures to Save) starting on March 28. The exhibition brings artworks from the region of the Marche damaged in the recent earthquakes that destroyed homes and centuries-old churches.

In the Salone de’ Cinquecento of Palazzo Vecchio, the City of Florence is hosting a symposium, Exportation of Cultural Heritage: Comparisons between Italy, the United Kingdom, the United States, the Netherlands, and Germany. Held on March 28 at 3:30 pm, special guests include mayor Dario Nardella, Uffizi director Eike Schmidt in addition to Gabriele Finaldi and Taco Dibbits, directors respectively of Amsterdam’s Rijksmuseum and London’s National Gallery. (tessa lucia debole)