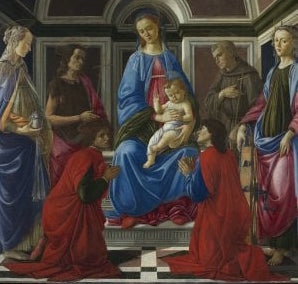 Famous Florentine painters from the Renaissance era — they’re just like us!

Even Sandro Botticelli, one of the most highly respected and admired painters of the Italian Renaissance, and mastermind behind the iconic Nascita di Venere (Birth of Venus), suffered from an affliction well known to many of us non-artistic, non-genius, regular people: second thoughts.

Madonna con Bambino e Santi (1470) is a depiction of the Madonna, seated in the center of the scene with Baby Jesus in her lap. Four saints stand by her sides, and two kneel at her feet. Formerly the altarpiece at the Church of Sant’Ambrogio, Botticelli’s painting has been undergoing repairs since 2018 at the Opificio delle Pietre Dure, due to issues of discoloration and structure. This has revealed something very curious — Botticelli made many changes, both drastic and subtle, during the artistic process. Part of the restoration involved the complicated technique of reflectography, that which allowed the specialists to detect layers of work under that which appears to the eye on the surface.

It was discovered that certain figures were previously in contradictory places and positions. For example, during the original phases of the artist’s work, the eyes and legs of the baby were angled in directions that differ from how they are positioned now. There are also some more subtle changes — one of Santa Caterina’s thumbs was originally visible, but Botticelli eventually decided to conceal it underneath a fold of her cloak. The outline of the erased thumb lingers. Why Botticelli had qualms about the visibility of the finger is something for which we do not have the answer.

The most curious find was a solitary pair of eyes, at mid-chest level of the aforementioned saint. It is not concretely clear what its original purpose was, but it is likely it was intended for an initial rendition of Santa Caterina, in a kneeling position. Botticelli must have later reconsidered and completed the figure as standing, as it is now.

The director of the Uffizi, Eike Schmidt, marvels at how the advancement of the science of conservation and restoration has given way to discoveries such as these, in regards to both Botticelli’s work and those of his contemporaries: “Even the most famous, iconic works that we think we know everything about, have more information to offer.” Madonna con Bambino e Santi has not been the first to come out with some, and will most likely not be the last.

Within the next few days, the work will make a triumphant return from the restoration center to the Primavera gallery room in the Uffizi, this time with some secrets fewer.