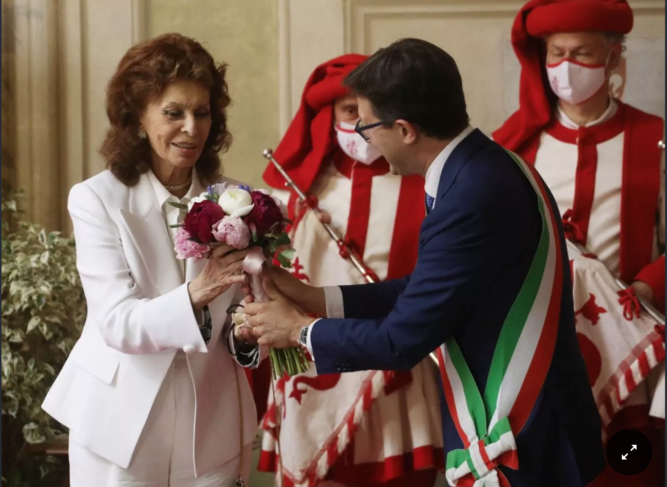 Italian icon Sophia Loren was given a bouquet of flowers and the keys to the city on the morning of June 5 by Florence mayor Dario Nardella, who, at the end of the ceremony in Palazzo Vecchio’s Michelozzo Courtyard, played ‘O Sole Mio’ in honor of the Neapolitan actress, on his violin.   Afterwards, Loren inaugurated a restaurant in Florence named for her in via Brunelleschi, and lunched there.

“The residents of Florence, whom I represent, are grateful and honored that Sophia, a global symbol in the fields of art and culture, has accepted the city keys,” said Nardella.   “Sophia has touched the lives of movie-goers for generations with her talent and sensitivity.  Her films depicting the human condition have made us laugh and cry, including the recent  “The Best of Youth,” for which she won a “David di Donatello” (Italy’s Academy Award).  Every single day represents a new chapter in the life of this extraordinary actress, and her timeless creativity has united Naples and Florence, Italy and America.”  Nardella is a native of Torre del Greco, a Naples suburb, moving to Florence at age 14, where he studied at the conservatory and later earned a law degree.

“I am moved, and happy,” responded Loren, “also seeing so many people here who love me.  I am looking forward to returning to Florence with my sons for a vacation in this beautiful and marvelous city.”  (rosanna cirigliano)