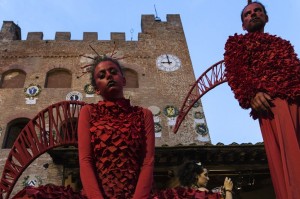 Dusky summer nights in Certaldo Alto come alive with a dazzling, packed program of performances when the Mercantia street theatre festival, Italy’s first, begins.  Perched on top of a hill nestled inside beautiful red and brown brick walls, the streets are the stage for a variety of entertainers.

Spectators can enjoy acts ranging from traditional cabaret and similar theater styles to clowns, contortionists, and their fellow companions usually only seen under a red and white striped circus tent.

Musicians like the Badabimbumband and other ensembles spill out into the piazzas, courtyards, and gardens as well, ensuring every inch of this tiny town is filled with the sights such as the orange flames and smoke wafting from a fire eater’s mouth and the sounds of brassy Dixieland melodies floating through the air.

Two all-female marching bands promise to be crowd favorites: Alchimie Musicale and Be Diesis will return to Mercantia with their distinctive flair. Dressed as dolls, the former are instantly recognized by their violins and violas; the latter features New Orleans spunk, performing their show with trumpets, saxophones, and drums in tow.

Comedians and body painters will be demonstrating their talents and audiences will be treated to a musical tribute honoring singer and French icon Edith Piaf. Puppet shows and marionettes will delight young and old. The colorful scene will be heightened by devils and angels with intricately detailed wings parading through the streets.

Ideas from the whole world are collected and displayed in a melting pot through entertainers from four continents who come to participate, representing and bringing to life “The Ten Directions.” This year’s theme stresses the magical atmosphere created by these events, seeking, according to the organizers, to “challenge traditional geometries” and “break the line and its uniformity.”

Mirrors, the centerpieces of two art installations titled Specchio and Butterfly, amplify this focus and add a new direction of their own: within. By prompting the viewer to look at their secrets and inner self, they seek to facilitate the discovery of personal qualities and strengths.

The uniquely innovative spirit characterizing Mercantia has inspired events of a similar nature.  Fusing medieval and modern elements is perhaps what it does best: for instance, WannaDanceLand will take over the ballroom of Palazzo Pretorio with a DJ every night, inviting the audience up for a dance party (9:30 – 11:30 pm).

Built of brick, marble, and glazed terracotta, the palace was originally the castle of Count Alberti and his family who ruled until the twelfth century, then became the residence of Florentine governors, and today, hosts festival performances in what now is the Town Hall.

Another dance company, Cafelulè, will occupy a higher venue–on the walls.  Their six members will weave a story of past and present through vertical performances on the facades of historical buildings such as Carpi, Fortezza Viscontea, and others (daily, Piazza SS. Annunziata 10:15 and 11:40 pm).  Stories from Roman mythology and classic fairy tales will be reimagined and reworked by theater groups including Alice’s jaunt through Lewis Carroll’s Wonderland and Theseus and Ariadne’s treacherous adventures with the Minotaur.

Certaldo was also the home of renowned writer and poet Giovanni Boccaccio, best known for his Decameron. This collection of short stories is regarded as one of the most important pieces of 14th century literature, highly influential and notable for its narrative complexity and cheeky content.

This medieval town’s annual celebration of the arts, now in its 28th year, is just a quick funicular ride from its modern counterpart, Certaldo Basso. Though regarded as a suburb, Certaldo Basso is not exempt from Mercantia’s timeless charm.  The artisan spirit remains present even outside of the walls downhill, where market booths are set up selling hand-made jewelry and other crafts.

Rooted in the world of the past, it is Mercantia’s magic that generates an irresistible pull to join the celebration.