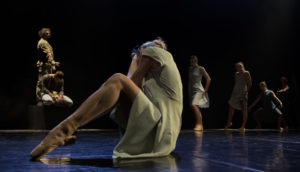 The Florence Dance Performing Arts Festival will have its grand dance finale of the summer season on July 19, followed by an orchestral concert  on July 24, both starting at 9:30 pm.  The four choreographies spotlight the both up-and-coming and established talents, while the concert will focus on contemporary music, bringing tangible excitement to the venue, the Great Cloister of Santa Maria Novella.

Ferrone and co-founder and co-organizer of FDF, Marga Nativo both have significant performing experience that has helped them mold the artistic vision of the festival. Marga Nativo was a prima ballerina of the modern-day Florence opera house from 1966 to 1987. She won numerous awards for her dance, including the prestigious Golden Florin (Fiorino D’oro) from the city of Florence, a prize that recognizes citizens who have enriched Florence and its institutions through their outstanding contributions in various areas, including the arts, politics, and philanthropy. Keith Ferrone is an American dancer and choreographer originally from New York who has choreographed over 50 ballets to date. Together with Nativo, Ferrone founded the Florence Dance Center, the Florence Dance Festival, and the Florence Dance Company. Ferrone was awarded the prestigious Tuscan-American award for having “contributed significantly to further develop the ties of friendship and exchange between the United States and Tuscany.”

FloDance2.0, an emerging company of young local dancers, will perform “1943,” a show that tells the story of the Italian soldiers sent to fight in World War II. The show promotes the idea that “Wars are the true scourge of humanity and in wars no one wins because even those who win lose many human lives of their people, of their nation.” The show features the choreography and artistic direction of Marga Nativo and promises to be deeply moving.

Cie Roue Serendip is a contemporary Parigian dance company that aims to bring contemporary dance to a wide audience. “Piece de Poche” is both choreographed and performed by two members of the company, Tristan Bénon & Prunelle Bry. The show tells the story of “two characters who never tire of meeting.”

According to the FDF website, “Pièce de Poche is accessible to everyone, and invites those who want to surrender to it with open arms.”

The performance “Fa’atama” is inspired by the book “Matalasi” by Jenny Bennett, a human rights activist who uses writing as a tool to raise awareness on LGBTQIA issues. The book follows Matalasi, a “fa’atama”, a Samoan term for people born a woman who identify and/or behave like a man. A story based on conformity and an individual forced to choose between identity and survival.

Andrea Marino, one of the stars of the new generation of dancers, works as a soloist at the Theater of Monaco in Bavaria. Marino, who is now 23, moved from Sicily to Vienna at just 14 years old to pursue his dream of becoming a professional dancer.

The Florence Chamber Orchestra was established in 1981 by current director Giuseppe Lanzetta to spread the knowledge of the symphonic and chamber repertoire. It immediately attracted the attention of national and international critics thanks to concerts held in Italy for important musical institutions and abroad on various tours. There will be 36 musicians playing at the concert, which is dedicated to the British rock band Coldplay.