The Kick-Off of Calcio Storico Semifinals 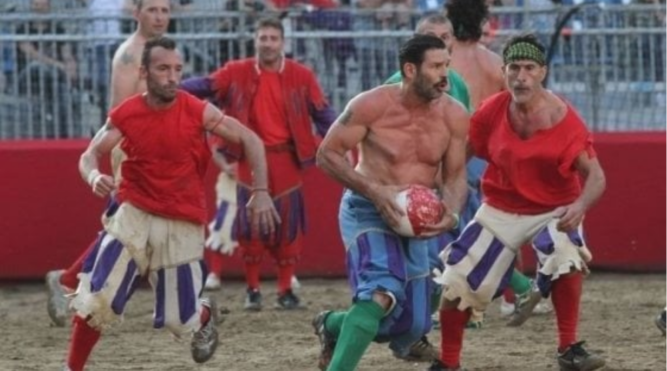 This weekend, June 16 and 17, is the kickoff for one of Florence’s most beloved traditions — Calcio Storico, a violent, historic ball game that serves as the battleground for a year’s worth of neighborhood supremacy.  The reds will face off against the greens on Saturday, with the whites battling the blues on Sunday.

After a procession of 530 people in 16th century clothing, representing traditional families, guilds and institutions of the city, two teams of 27 play a game best described as a mix between soccer, rugby and wrestling in the Piazza Santa Croce. The match itself lasts 50 minutes, and though points are scored by launching the ball through the opponent’s end of the field, there are few other rules limiting gameplay. The one exception — any stoppage of action causes the players to reset at midfield.

For the first time ever, audience members will not be able to bring in alcohol or hold glass bottles or cans;  firecrackers and pepper spray are also forbidden. A high-ranking police official, Laura Lega, ordered these potentially dangerous objects to be banned during both the semi-final and final matches.

Each of the four quarters of the old city is represented by a team, with a defining color: red for Santa Maria Novella; green for San Giovanni; white for Santo Spirito; and blue for Santa Croce. While the final is always held on June 24, the day celebrating Florence’s patron saint John the Baptist, the semi-final games take place the previous weekend, this year on June 16 & 17.

Calcio Storico developed from a military training exercise to a game for medieval and Renaissance nobility, used to flaunt skill and physical prowess in the vein of jousting and tournaments. When a game was organized during a siege by Holy Roman Emperor Charles V, on February 17, 1530, the sport transcended its vainglorious origins to become a symbol of freedom and defiance for Florentines.

After falling out of fashion in the 18th century, the tradition was revived in 1898, when the rules were firmly established and it was officially branded. It was played sporadically from then until 1930, when it became the annual event it is today.

The games begin at 5 pm, with the procession on the day of the final starting around 4 pm. Tickets range in price from 29-80€ depending on which section they are seated in, and must be purchased in person at the Box Office, via delle Vecchie Carceri 1, which opens at 11 am. (alex harrison & sierra case)