The Sounds of International Soul 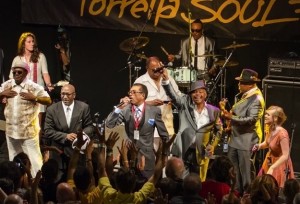 Soul music is self-explanatory—music that reaches into your essence through its combined elements of African-American gospel music, rhythm, blues, and jazz. This year, the 28th edition of the Porretta Soul Festival, which began in the late ‘80s thanks to the passion of artistic director Graziano Uliani, is dedicated to the late, great Otis Redding.

American singer-songwriter Redding, known as the “King of Soul,” impressed listeners with popular songs such as “(Sittin’ On) The Dock of the Bay.”

Poretta Soul will feature a grand opening on July 23 with a tribute to ‘The Godfather of Soul’ and founding father of funk music, James Brown. The inauguration will star the Japanese funk band Osaka Monaurail, with a total of nine rhythmic members, who will be followed by the Fanfara dell’Arma dei Carabinieri, an Italian military band.

The lineup will consist of both artists who are well known to soul music lovers and wonderful surprises to the general public. Special guests include influential and innovative funk drummer Bernard “Pretty” Purdie and the ‘80s queen of rhythm & blues , Sugar Pie DeSanto from California.

Taking part in the festival for the first time will be legendary saxophonist Joe Arnold, a former member of the Grammy-winning soul ensemble The Memphis Horns, as well as younger sax musicians Gordon Beadle and Nancy Wright. Alongside the new generation of blues vocalists, such as Sugar Ray Rayford, the celebration will showcase personalities like David Hudson, Chick Rodgers, and Theo Huff.

This year the event, in the historic center of Porretta Terme, will attract numerous visitors to the Rufus Thomas Café. This home of outdoor concerts will be integrated with the Soul & Street Food Village, dedicated to the delights served by food trucks with specialties from Italy and the world.

The schedule of events is as follows:

White Mama & The Soul’d Out (Bologna)