TSH: A New Kind of Hotel in Florence 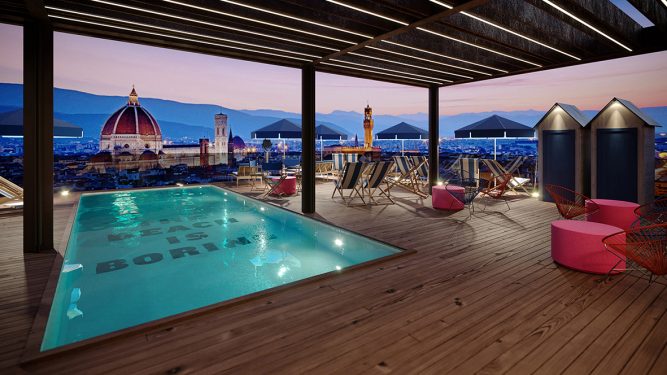 Opening on July 1, The Student Hotel‘s (TSH) first Florence location will bring 390 modern, stylishly designed rooms to the city, targeted to an ever-growing population of global and digital “nomads.”

Complete with a state-of-the-art gym, extensive collaborative spaces for co-working, and a rooftop bar and pool with staggering views of the Duomo, The Student Hotel holds to true to its tag phrase: “Completely Connected Community.” It is a model with an undeniable draw for world-trekking millennials, college students, and the rising tech-savvy Z and Alpha generations—all demographics that are likely to prefer more affordable, shared spaces and unconventional experiences to a traditional, 4 or 5-star accommodation.

True to its namesake, special semester-long student packages are offered, with access to the hotel and its amenities included in the price. Other short-term stay options are available as well. However, the question of TSH’s true affordability has already been the cause of controversy surrounding the opening in Florence. According to the local daily La Nazione, student activists from the University of Florence were unimpressed by the glossy frills of the June 7, 2018 inaugural event. They held a protest nearby where they expressed the inaccessibility of TSH to actual Florentine students, who don’t ask for more than a place to stay, WiFi, and maybe air-conditioning.

A cheeky, playful vibe is palpable upon first stepping into the building, the newly renovated imposing “Palazzo del Suono” looking out over via Lavagnini and via Strozzi. The façade of the building is freshly painted in a creamy Florentine yellow. However, upon entering pink neon strip-lights on the walls and upbeat house music take over, TSH’s ideology of the equal importance of “work” and “play” already on display. Bright red swings hang from the ceiling of the lobby, and block-lettered slogans adorn everything from the walls to the bottom of the pool, saying things like “The Beach is Boring” and “Don’t Shoot the Pianist.”

The CEO of TSH, Charlie MacGregor, who started the organization after experiencing the difficult and pricy process of finding housing as a university student and young worker himself, stresses the importance of Florence to his company, though his extensive future plans in the city already make this quite clear.

In addition to this location, on Viale Lavagnini TSH plans to open two more hotels in the Florence area: one on Viale Belfiore and another in the old Manifattura Tabacchi (a former tobacco factory industrial space) in the Cascine Park. Both of these projects focus on creating mixed-used developments, containing spaces available to travelers, students, and locals alike. As another part of their initiative to shape the urban landscape of Florence and the other cities they arrive in, TSH hosts monthly programs that engage the local community and open up the hotel for product pitches and more.

The Student Hotel has also partnered with the United Painting Crew and Il Cenacolo, groups invited to paint the courtyard of the hotel to celebrate the Lavagnini location’s opening. Future colorful initiatives plan to revitalize neighborhoods and bring opportunities to youth and migrants in Florence and Tuscany.

The scope of the company’s impressive future ambitions, not just in Florence and Europe, but around the world, is dizzying. TSH’s rapid rate of growth reflects a changing reality of the hospitality scene which MacGreggor is eager to mention. He cites a growing market of young travelers that outpaces the coffee, gaming, and music industries combined–exploding from 5 million to a projected 8 million in the next few years.

Watching how the ancient wonders of Florence hold up against this swiftly digitizing, modernizing hospitality landscape will certainly prove interesting. For now, it is a contrast that is as jarring as it is intriguing.  (tyler bunton)