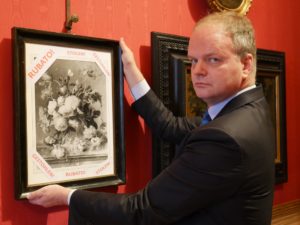 “Finally, the ‘Vase of Flowers’ by Jan van Huysum returns to its home after 75 years” says Eike Schmidt, the director of the Uffizi. The Ministry of Foreign Affairs made the announcement that this acclaimed work of art, which has remained in Germany since 1944, will be returned imminently to its original home, Florence’s Palazzo Pitti Palace. A restitution ceremony on July 19, featuring numerous Italian officials and Germany’s Foreign Minister Heiko Maas, will be held in the Sala Bianca del Museo di Palazzo Pitti at noon.

The Grand Duke Leopold II purchased this early 18th-century oil painting for the opening of the Palatine Gallery in 1824, however, in 1940, the museum was evacuated at the start of the war and the painting was hidden in the Medici villa of Poggio a Caiano. In 1943, the work was relocated to Villa Bossi Pucci, where it was stolen only a year later by a Nazi soldier and brought to Germany. It was found in 1991 upon the fall of the Berlin Wall and since then, many officials have made efforts in trying to secure its return to the Uffizi Galleries.

Despite the multiple requests from Italian officials, the family that inherited the famous masterpiece from the soldier have not agreed to give the painting back. Over the years, they have tried to sell it back, even though it technically belongs to the Italian government. On New Year’s Day, Schmidt requested it to be returned during a press conference and also asked the German government to press bribery and extortion charges against the descendants of the thief.

Currently standing in the piece of art’s place is a black and white photo that hangs on the wall, accompanied by a sign in various languages that reads “Stolen! This work was carried by soldiers of the Nazi army in 1944 and is now in a German private collection.” Schmidt speaks for the whole city when he says, “This masterpiece is a fundamental piece in the collection of the still lifes of Palazzo Pitti, known for being unique in the world under the profile of the richness and geographical variety of the works.”

For the past few decades, locals and tourists have been hoping and waiting for the day of its return and now, they no longer have to worry. The ‘Vase of Flowers’ can now take its rightful place once again. (sierra case)